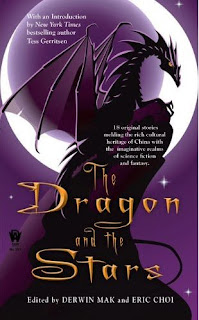 Posted by Derwin Mak at 7:10 PM No comments: 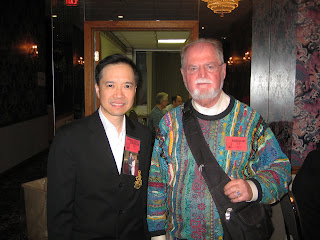 Photo above: I was one of the Guests of Honour at Eeriecon 13, a science fiction convention in Niagara Falls, New York. The other Guest of Honour was the great Larry Niven. In addition to panel discussions, I was on a mission for a friend of mine: to find out how to pronounce the first name of Larry's fictional character, Louis Wu. Is it pronounced like "Lewis" or like "Lou-ee"? I asked Larry, and he said, "Either way goes, but I prefer 'Lou-ee'." 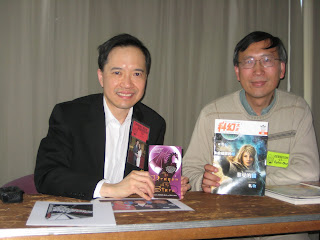 Photo above: For the first time, Eeriecon had a panel about science fiction from outside the North American-British sphere of influence. The panel was called "East Asia SF". Here I am with Ruhan Zhao, who writes science fiction stories for Chinese magazines such as the one he is holding. Ruhan was Eeriecon's first writer from China, though he lives in Rochester, NY, now. Ruhan talked about the revival of science fiction in China, and I talked about Japanese novels now available in English translation. 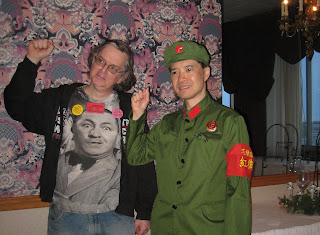 Photo above: Horror writer and Three Stooges expert Darrell Schweitzer and I give the Communist salute before the masquerade. No, that is not my military uniform. I'm in costume as the Chinese tour guide from the Japanese anime series Ramna 1/2. 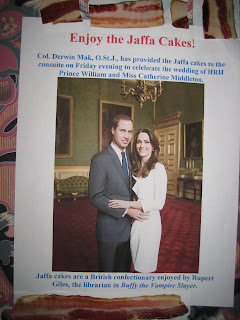 Photo above: April 29 was also the day of the Royal Wedding of HRH Prince William, K.G., and Miss Catherine Middleton, the future King and Queen of Canada, so I brought Jaffa cakes to the consuite to celebrate this historic occasion. Jaffa cakes are a biscuit that Giles eats on Buffy the Vampire Slayer. The poster is attached to the wall with tape with images of bacon on it. Why do science fiction fans always get the weirdest things?

Anyway, although the Americans were suspicious of the British biscuits at first, by Saturday afternoon, they had eaten all four boxes of them.