Ming Pao Daily News article about The Dragon and the Stars: English Translation 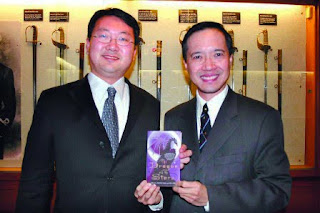 The anthology, called The Dragon and the Stars, will be published by well-known American science fiction publisher DAW Books. It contains 18 short stories from , the , Hong Kong, the , and . The 18 Chinese authors wrote their stories in English over six months. Five of the authors are from , and they are strong in Canadian sci-fi circles.

Tony Pi was born in , immigrated to when he was 8 years old, and grew up in . He earned his Ph.D. in linguistics at 's and has worked at several universities in . At present, he is administering the graduate program in Cinema Studies at .

For the new book, he wrote the fantasy story "The Character of the Hound". The story centers on a war between the Southern Song and Jin. The ghost of a soldier adopts the word "Dog" as a tattoo on his body and acquires super powers to solve a murder in the army.

Tony Pi likes science fiction, in particular, Japanese manga (comics). "I like to use imagination to explore the present and the past and things that do not exist in the world. I like to create." In 2006, he wrote his first story, "The Stone Cipher", which won second place in the first quarter of the Writers of the Future contest, an international competition that finds cutting-edge science fiction writers. So far he has published 20 short stories, each of about 4,000 words.

Derwin Mak is another Chinese science fiction writer. He was born in . His father is from , and his mother is Malaysian Chinese. He is a chartered accountant, a member of Royal Canadian Military Institute, and a lecturer at the Institute.

He wrote "The Polar Bear Carries the Mail", about a Chinese company that joins with Inuit in northern to build a spaceport but are opposed by environmentalists. The main character is a Chinese astronaut, and the story involves feng shui problems.

He said the new book is significant in correcting the past image of Chinese people and their culture in science fiction, which has been often negative. "The stories in The Dragon and the Stars all have Chinese themes, and many have ethnic Chinese main characters. Chinese culture is 5,000 years old, there are four great inventions of , and Chinese history is full of scientific and technological development. This is a rich basis for science fiction and should be reflected in current stories."

Addendum to the English translation:

The original Chinese text refers to The Dragon and the Stars as a science fiction anthology, but it also contains fantasy stories.
Posted by Derwin Mak at 11:09 AM