The Honorable Order of Kentucky Colonels (HOKC) has this picture of Colonel Charles Todd in uniform, circa 1820: http://kycolonels.org/index.cgi?id=13 . After then, illustrations and descriptions of Kentucky Colonels uniforms are scarce, though a close-collared uniform existed in the early 20th century. Photographs of it did not exist until one was discovered in 2008:

Over the years, several colonels have appeared at the Kentucky Derby and other events wearing Civil War-inspired uniforms (costumes?). Some were Union blue, others were Confederate grey. During the Civil War, Kentucky was in both the Union and the Confederacy simultaneously, with a Union-aligned government in Frankfort and a rival Confederate government in Bowling Green.

In 2007, a year before the 1931 uniform was re-discovered, I made my own Kentucky Colonel uniform based on a Civil War style. I made it from a black frock coat tuxedo from a shop that sold prom clothes to high school students. The shoulder rank insignia, Kentucky state seal buttons, and cap come from a Civil War re-enactors supply store. The gold stripe on the sleeves and pants came from fabric store in Toronto's garment district. I used to have a cap insignia made from an HOKC metallic logo decal adhered to a thick cardboard base. When the HOKC re-issued the historic aide-de-camp badge (a red, white, and blue shield topped with a gold eagle) as a lapel pin, I used it as a cap badge and insignia on the uniform. 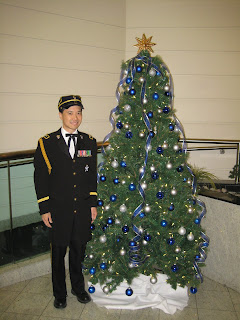 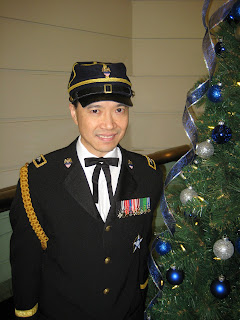 Beside the Christmas tree in the condo building lobby, December 22, 2010. Photo by Kent Wong.


I also made a modern white mess dress uniform for a specific event. As a science fiction writer, I'm sometimes asked to present science fiction awards. One of these awards ceremonies, the Constellation Awards for Canadian science fiction film and TV shows, was held on a stage with an unavoidable black backdrop. The director told me to wear any colour except black. The best contrast with black is white, so I created a white mess dress uniform. It is a U.S. Army white mess dress jacket whose original buttons have been removed and replaced with Kentucky buttons from a Civil War re-enactor supply store. The shoulder epaulettes and braid are from a company that sells supplies to American high school marching bands and ROTC units. The Kentucky aide-de-camp shield pins are from the HOKC. 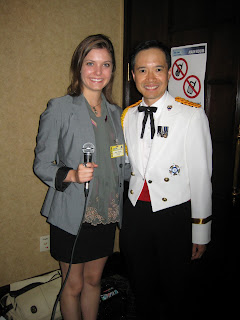 My friend Stephen Lautens, another Kentucky Colonel in Canada, made a modern mess dress uniform based a description of one of the uniforms approved, but possibly never made, at a 1931 meeting of the Kentucky Colonels. His magnificent creation is shown on his website:

Of course, I'm going to have to get a uniform like Stephen's made before the next time I'm nominated for an Aurora Award.

That there is little uniformity in Kentucky Colonel uniforms over the years is typical of American military garb of the nineteenth century. Despite what movies may show, the Union and Confederate forces wore a variety of uniforms. Each regiment or unit had its own uniform, and colours included blue (worn by both sides), grey (also worn by both sides), red, and green. The Union even had a militia unit dressed in kilts like a British Highland regiment (the 79th Regiment, New York State Militia). Thus an American tradition continues, curiously upheld by Canadians in Toronto.