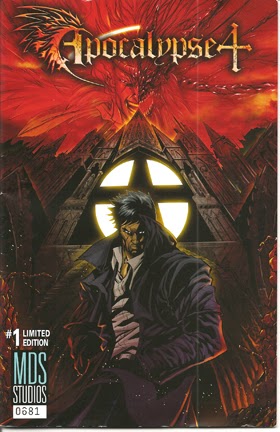 The promotional campaign for Apocalypse4, a new comic book series, is all about the artwork and the artist, Hugh Rockwood. Its website www.apocalypse4.com has a gallery of images from the comic but nothing about the subject, theme, or plot of the series. Is the lack of information about the story intended to create a mystery to entice readers? Or is it due to a publicity campaign run by artists who have forgotten that they also have to sell the story? Yes, comics are a visual art, but they are also a form of storytelling too.


The story is by Corrado Rizza. It begins in heaven. For reasons unexplained, God orders the Archangel Michael to lead an angelic army to destroy the human species. This decision bewilders the angels. One of them, who had been a priest named Ignacio del Vega, disobeys God by stealing long, sharp crystals called Shards of the Horsemen. Without the Shards, Michael and his army cannot destroy humanity. The story does not explain what the Shards are, but this is issue 1; the story is just starting.


Del Vega goes to Earth, and disguised as a normal homeless bum, hides from the Archangel Michael. Del Vega realizes that humanity is far from perfect, but in his opinion, it isn't so evil as to justify God's wrath. There lies a mystery: why would God suddenly want to destroy the human race?


On the streets, Del Vega meets Archangel Gabriel, who doesn't look like a traditional angel, but rather, a winged humanoid reptile on steroids. Gabriel, like his colleague Michael, is extremely eager to kill billions of people – if only he could get the Shards of the Horsemen. Satan, in the form of a man with long red hair and black leather jacket and pants, also comes to ask Del Vega for the Shards of the Horsemen.


There are also a scientist and a particle accelerator involved, though not much is said about them in issue 1.


The artwork is gorgeous. The first four pages have a glittering depiction of the Grand Atrium of heaven, a golden, bejewelled palace in the clouds. Its design is reminiscent of depictions of the Ark of the Covenant, but with the Ark's artistic style used on a building, not a chest. The gold of the heaven scenes contrast sharply with the dark blues of the Earthly city scenes that follow.


Thankfully, the fight scenes are not too cluttered in issue 1. The fights have only three or four panels per page, unlike some other comics that can really tire out the reader by cramming too many distinct images into one scene.


Angels have become somewhat clichéd in recent years. There are now so many angels in genre romance novels that they form a sub-sub-genre within the paranormal romance sub-genre. The romance field is full of angst-ridden fallen angels and do-gooder angels who fall in love with human women. In the fantasy and horror genre, God's and Satan's minions frequently re-enact Milton's Paradise Lost, the mother of all stories of angels versus demons. How does Apocalypse4 fare in a market full of clichés?


The idea of a fallen angel (albeit self-exiled) is nothing new, though in this case, Del Vega was a priest in his human life but also sufficiently strong-willed and rebellious to steal the Shards of the Horsemen. His independent streak comes out in his meetings with Gabriel and Satan. Maybe it will help the writer avoid potential clichés in subsequent issues?


Issue 1 has no explanation of the Shards of the Horsemen; what are they? It has become a trope of science fiction and fantasy for the characters to chase after an object or treasure. Issue 1 just starts the story. We'll have to look at future issues to see whether the Shards of the Horsemen turn out to be something that the readers care about or whether they're just a MacGuffin, a plot device that motivates the characters to chase an object or each other but is ultimately unimportant on its own.


The Archangel Gabriel as a bloodthirsty reptile is an interesting way to portray the character. I didn't see that in Paradise Lost.


Issue 1 starts the story and ends on a cliffhanger, so we shall have to wait for future issues to see how the story unfolds. The story gets a good start with gorgeous art and intriguing characters -- let's see how it continues.
Posted by Derwin Mak at 10:58 PM