Wrestling With Gods (Tesseracts Eighteen): "Mecha-Jesus" is the Lead Story 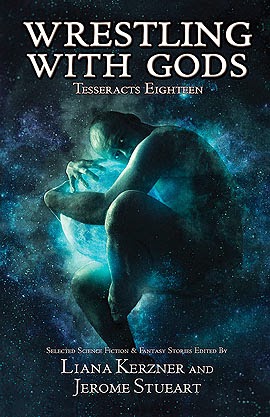 My story "Mecha-Jesus" is the first story in the anthology Wrestling With Gods (Tesseracts Eighteen), edited by Liana Kerzner and Jerome Stueart. This is the latest of the Tesseracts series of anthologies of Canadian science fiction and fantasy.
"Mecha-Jesus" is about a Japanese town that uses an android of Jesus as a tourist attraction at its Christ Festival, where the locals, none of whom are Christian, celebrate the life of Jesus, the Israeli rebel who escaped crucifixion and became a rice farmer in Japan.
Wrestling With Gods' theme is religion in science fiction, fantasy, and horror. The stories draw from a wide variety of inspirations. A sample of the stories includes the myths of cuttlefish, a vampire in residential schools, a Muslim woman who wants to get closer, surgically, to her god, the demons of outer space, the downside of Nirvana. Wrestling with Gods (Tesseracts Eighteen) take their faith and religion into the future, into the weird and comic and thought-provoking spaces where science fiction and fantasy has really always gone, struggling with higher powers, gods, the limits of technology, the limits of spiritual experience.
.
At times profound, these speculative offerings give readers a chance to see faith from the believer and the skeptic in worlds where what you believe is a matter of life, death, and afterlife.
.
The stories are by: Derwin Mak, Robert J. Sawyer, Tony Pi, S. L. Nickerson, Janet K. Nicolson, John Park, Mary-Jean Harris, David Clink, Mary Pletsch, Jennifer Rahn, Alyxandra Harvey, Halli Lilburn, John Bell, David Jón Fuller, Carla Richards, Matthew Hughes, J. M. Frey, Steve Stanton, Erling Friis-Baastad, James Bambury, Savithri Machiraju, Jen Laface and Andrew Czarnietzki, David Fraser, Suzanne M. McNabb, and Megan Fennell. ﻿

Wrestling With Gods is already available as a Kindle edition from Amazon:

There will be a book launch at the Merril Collection of Science Fiction, Speculation, and Fantasy in Toronto on Thursday, April 30, 2015. Stay tuned for more information.