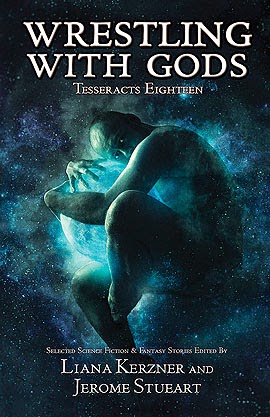 Calling all Canadians citizens at home and abroad and permanent residents of Canada: our national science fiction awards, the Aurora Awards, are now open for nominations.

Wrestling With Gods: Tesseracts Eighteen, is the latest of the Tesseracts anthologies from EDGE Science Fiction and Fantasy Publishing. This is the first one with the theme of religion in science fiction and fantasy. The stories are diverse and at times profound and give readers a chance to see faith from the believer to the skeptic in worlds where what you believe is a matter of life, deth, and afterlife.

Since the Kindle e-book edition was released in November 2014, Wrestling With Gods and all its stories are eligible for the 2015 Aurora Awards.

The Kindle edition is already available on Amazon, and the print edition will be out in March 15, 2015.