The Year of Virtual Sci-Fi Conventions 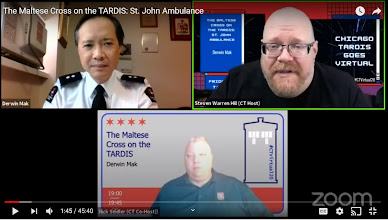 With Steve Warren Hill and Nick Seidler, the hosts of Chicago TARDIS virtual convention, 2020
2020 has been the first year in decades when I went to only one science fiction convention in person (Gallifrey One in February). However, I did attend the virtual conventions that popped up, and I've been impressed by how the fan-run conventions switched to virtual programming so quickly. The virtual conventions let me talk to people I hadn't been able to see for a long time. I got to watch Eric Choi's and Jeff DeLuzio's panels at Penguicon, talk to Darrell Schweitzer about our favourite pretenders to the Byzantine crown at Amazingcon (which began as a virtual convention from year 1), and went to the Heinlein Society party at CoNZealand, and came in third place at the SFWA Halloween Party's masquerade, which was followed by a dance dejayed by John Scalzi. In November, I got to explain St. John Ambulance logo to the Doctor Who fans at the virtual Chicago TARDIS.

Using the new technology was like the old days of fandom, when small groups of fans held conventions for other fans and had to learn how to do things as they went along. At Amazingcon, Ira Nayman appointed me to be the host of Darrell Schweitzer's reading on the spot, so I suddenly had to learn how to let people into the Zoom room, how to eject obscene interlopers (a duty that I did not have to perform, fortunately), find a photo of Darrell online, and share the screen so the audience could look at his photo during the reading. It was the first time I had to use any Zoom control other than "Join with Video" or "Join with Computer Audio". It was like the old days when one could suddenly be recruited to staple the program book together on the first day of the convention.

It was amazing how the fans came together to run the virtual conventions. Chicago TARDIS did something no other convention had tried: use Zoom for the panels, but instead of having the audience all join the Zoom meeting, broadcast the Zoom panel to Facebook Live and YouTube simultaneously, with tech staff collecting questions from the audience and sending them to the panelists. The technical set-up was complex, which I noticed during a tech test on Thursday night before the convention. Yet Chicago TARDIS' unpaid volunteers rose to the challenge, and it all worked on the weekend of the convention.

We also noticed that our audience numbers went up. Panels that would get double-digit attendance at in-person conventions saw their audience numbers shoot up. At an in-person Chicago TARDIS, my St. John Ambulance presentation would have gotten 30 people maximum if the room was full. The virtual presentation got 1,400 viewers on Facebook Live and 222 viewers on YouTube.